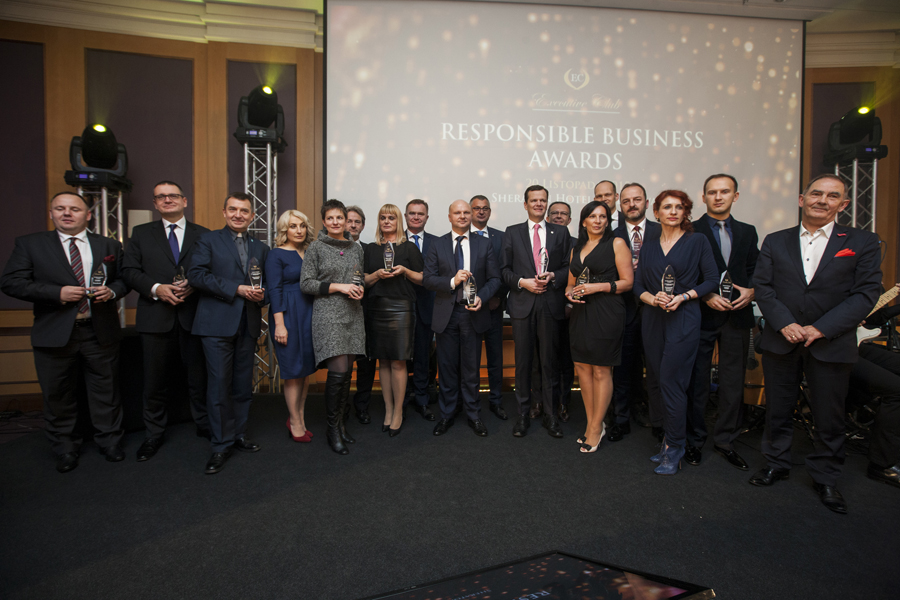 On Friday, November 20, the Sheraton Hotel hosted the “Responsible Business Awards Gala”, the jubilee Executive Club celebration, during which awards were given to companies, non-profit organizations and philanthropists who distinguished themselves with outstanding achievements in the field of social and charity activities.

Gala guests were welcomed by the President of the Executive Club, Beata Radomska and the chairman of the Club Council, Marek Michałowski. They reminded about the uneasy beginnings of the organization, which in 10 years has become a prestigious platform for representatives of the top management. Beata Radomska wishing the participants a pleasant evening expressed hope that the first edition of the “Responsible Business Awards Gala” will start a long tradition of promoting the idea of ​​responsible business.

The gala was opened by a letter from the President of the Republic of Poland Andrzej Duda. President have congratulated the originators of the Executive Club and the winners of the “Responsible Business Awards” and expressed the hope that the Club’s initiatives will continue to serve the successful development of Poland, and the discussion accompanying the solemn meeting will inspire others. The inaugural speech was given by Deputy Prime Minister, Minister of Science and Higher Education, Jarosław Gowin, who, thanking for the invitation to such an important ceremony, emphasized the importance of the event and the need for cooperation between business, science and philanthropic institutions.

Clou of the Gala was the solemn presentation of the “Responsible Business Awards“. This year, the jury awarded 17 statuettes and 5 special prizes. The winners in the “Outstanding CSR Strategy” category were Raben Group, PZU SA and Unibep SA, and special awards in this category went to Lyreco Polska S.A. and Promedica Care. Awards for “Outstanding CSR Project” were received by Konsalnet Holding SA, Philips Lighting Poland and Robert Bosch. “Outstanding Corporate Philanthropist” statuettes went to Asseco Poland SA, Microsoft and Totalizator Sportowy, and the title of “Outstanding Individual Philanthropist” went to Mr. Artur Czepczyński, owner, president of ABC-Czepczyński and Mrs. Katarzyna Rudnicka, president of the board of Vivenge. SIEMACHA Association, founded by Fr. Andrzej Augustyński received the award in the category “Outstanding Non Profit Organization“, and the winners of special awards in this category were the Ewa Błaszczyk Akogo Foundation and the SOS Children’s Villages Association.

The gala was hosted by Odeta Moro, a television and radio journalist, and Stanisław Sygitowicz, a film and television actor.