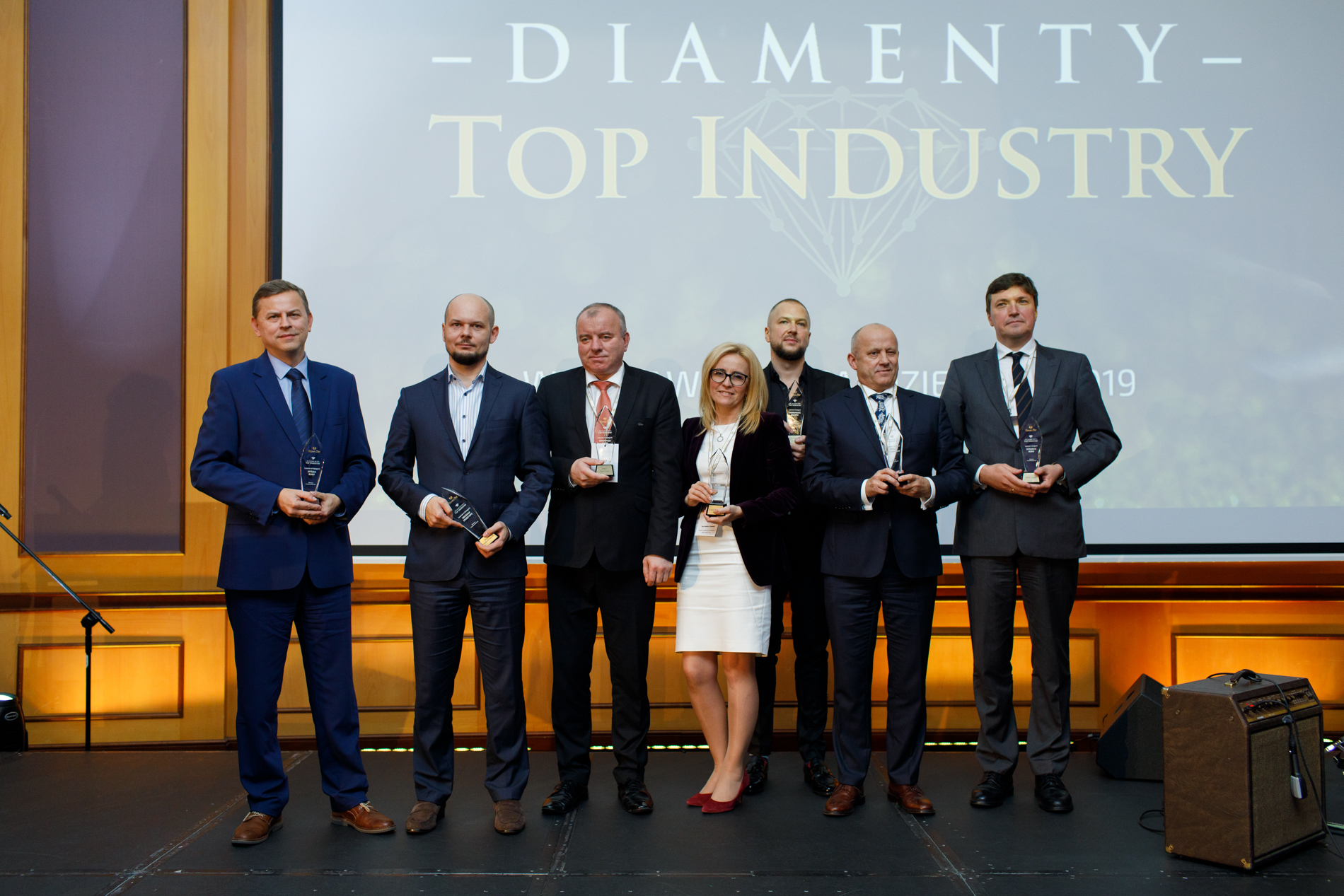 Top Industry Summit took place on October 23 at the Sheraton Warsaw Hotel under the honorary patronage of the Ministry of Digital Affairs and the Ministry of Investment and Development. Three discussion panels, three speeches, and eight “Top Industry Diamonds” – this is just a summary of what happened during the 8th edition of our conference.

The content-oriented part was opened by a speech of Robert Dzierzgwa, Director of the Development Strategy Department at the Ministry of Investment and Development, who talked about the condition and forecasts for the industry sector. The director pointed out that we should focus on the robotization of production processes, because the scarcity of resources in some areas means that without this revolution we may not be able to increase the productivity and competitiveness of Polish industry. Without revolution 4.0 we will also not be able to move to a higher level in the value added chain.

After the introduction, it was time for panel discussions. The topic of the first panel, moderated by Andrzej Soldaty, President of the Board at Future Industry Platform, was factories of the future. The panelists were: Jakub Bańcer – New Projects Specialist, Fanuc Polska, Ireneusz Borowski – Country Manager Poland, Dassault Systèmes, Thomas Ilkow – General Manager, Bosch Rexroth, Marcin Mądry – Marketing and Strategy Director, Lafarge Polska, Artur Pollak – President of the Board, APA Group, Edyta Ziajowska – Sales Director, Edenred Polska. The panelists agreed that industry 4.0 is not just about the coexistence of machines, robots, and people. It consists of 11 technologies, including the recently added quantum computers. Production plants are also no longer considered as single elements. Technologies and communication languages are standardized between all components of an enterprise. The progressing automation is pushing more and more people out of the market, which means that only few will remain – the intellectually flexible. There are production plants in Japan with 80 robots per 100 employees. By comparison, the average in Poland is 36 robots per 10,000 employees. This panel could be summarized by the statement that revolution 4.0 is an evolutionary technological change with revolutionary effects.

The next speaker of the conference was Dawid Dąbal, Vice President of the Board at FlexSim InterMarium, who presented a technology for the optimization of planned investments. He presented a simulation which was a virtual reflection of a real system, enabling detailed analysis and checkup of all proposed improvements. With the use of simulations it is easy to determine which system, out of thousands, is optimal and can contribute to an increase in efficiency, reduce losses, increase revenues, or reduce costs.

Afterwards we smoothly moved on to the second case study, which was presented by Marcin Szczebak – Advanced Logistics Consultant, Metroplan Polska, concerning AGV systems planning. The company presented a summary of individual stages in the implementation of such a system – from planning itself, through cost analysis, implementation, to maintenance and results. There were two main conclusions from the presentation: the implementation of such a system is not long, as it takes about 12 months, and its main advantage is security, as AGV systems eliminate warehouse truck accidents.

The second discussion panel, entitled “Industry 4.0 in logistics”, was inaugurated by its moderator, Marek Tarczyński, Council President at the Polish International Freight Forwarders Association, who briefly presented the origin of the concept of “Industry 4.0”. It appeared for the first time in 2011 at the Hanover Fair, and was clarified in 2013. Then the following panelists were invited to the stage: Andrzej Bułka – President of the Board, Fracht FWO Polska, Marek Foryński – BTS Managing Director, Panattoni Europe, Łukasz Kuliński – Branch Director, ROHLIG SUUS Logistics, Marcin Szczebak – Advanced Logistics Consultant, Metroplan Polska, Leszek Szelerski – Supply Chain Director, Lafarge Polska. Marcin Szczebak began by introducing the concept of Industry 4.0 based on a study from the World Economic Forum of 2018. It stated that 70% of production companies are at the very beginning of the transformations related to Industry 4.0. Alongside the construction industry, this is the sector with the most room for action, as both are considered the least digitized areas in Europe. Companies are already testing solutions that ensure the safety of drivers and their adherence to procedures. Applications are being tested that require the driver to take a selfie before setting off. The application then checks whether the driver is properly dressed. Flexibility on the part of companies is also required, as even the smallest weather fluctuations can change customer orders from day to day, and it is worth knowing that some companies ship up to 2500 trucks with materials daily! The panelists also talked about industry threats, such as unsuccessful investments or implementations. They can increase costs, which will cause companies to consolidate, giants to arise, and small businesses to disappear. Even now, e.g. on the ship operator market, in the last 20 years the 3 largest shipping companies increased their market share from 10% to 50%. Another threat is insufficient staff. This may be remedied by the influx of workers from abroad, but this is only a temporary solution, because these people will eventually travel further to the west. On the other hand, progressing automation and digitization of industries is a more permanent solution, and enterprises invest intensively in such solutions – in accordance with the saying of the Foreign Legion: “go or die”.

After the lunch break it was time for the third panel, this time focusing on the mobile revolution. The discussion was moderated by dr Monika Mizielińska-Chmielewska – Expert on Innovation and Smart Cities, Media Trend, who invited the following experts to the stage: Rafał Bajczuk – Senior Policy Expert, Electric Vehicles Promotion Foundation, Łukasz Bancarzewski – Electromobility Development Manager, Siemens, Michał Brzozowski – Managing Director, Metroplan Polska, Janusz Grądzki – Director for New Technologies, ENGIE Polska, prof. Mirosław Siergiejczyk – Vice Dean for Development and Cooperation with the Economy, Faculty of Transport, Warsaw University of Technology. The first topic was the challenges associated with the implementation of infrastructure for electric cars. There are still too few charging stations in Poland, and only a small share of electricity comes from renewable energy sources. However, this situation is changing dynamically, as we are becoming a construction site for solar panels – the dynamics of this technological development gives us the 4th place in the EU. However, we still have insufficient energy storage capabilities. Increasing them would solve the problem of the so called “Duck effect”, which means that the more energy we produce when it is least needed (in summer), the greater problems will arise with network stability. The panelists also discussed the changing behavior of consumers and its impact on the way they travel. In Germany, for example, which mostly used cars is the past, 2.5 million people have started using sharing services in the last 10 years, and this trend will continue. All this will matter in the future, whose visions were the last part of the discussion. According to one of them, with time we will stop buying cars and use highly developed car sharing services. Some visions are already coming true. Tesla has a ready concept based on the fact that when we arrive at work we no longer need our car, which can be shared as an autonomous taxi. There are also autonomous cars equipped with VR technology, which allows us, for example, to move to our apartment and watch a movie on the sofa while still driving. All these visions of the future are not very distant. Their implementation for everyday use is a matter of the next 10-15 years.

After the end of the content-oriented part, it was time for the evening gala. Its highlight was the award ceremony honoring the best companies, outstanding managers, and business leaders whose actions contributed to the progress of Revolution 4.0. The gala was officially opened by prof. Janusz Jurczak, member of the Competition Jury, and Beata Radomska, CEO of Executive Club. This year 8 awards were granted in 8 categories.

INVESTMENT OF THE YEAR

INNOVATION OF THE YEAR:

FINANCING BANK OF THE YEAR

ADVISOR OF THE YEAR

COMPANY OF THE YEAR

PERSONALITY OF THE INDUSTRY

Andrzej Wiśniowski – President of the Board at Wiśniowski

Piotr Woźniak – President of the Board at PGNiG SA