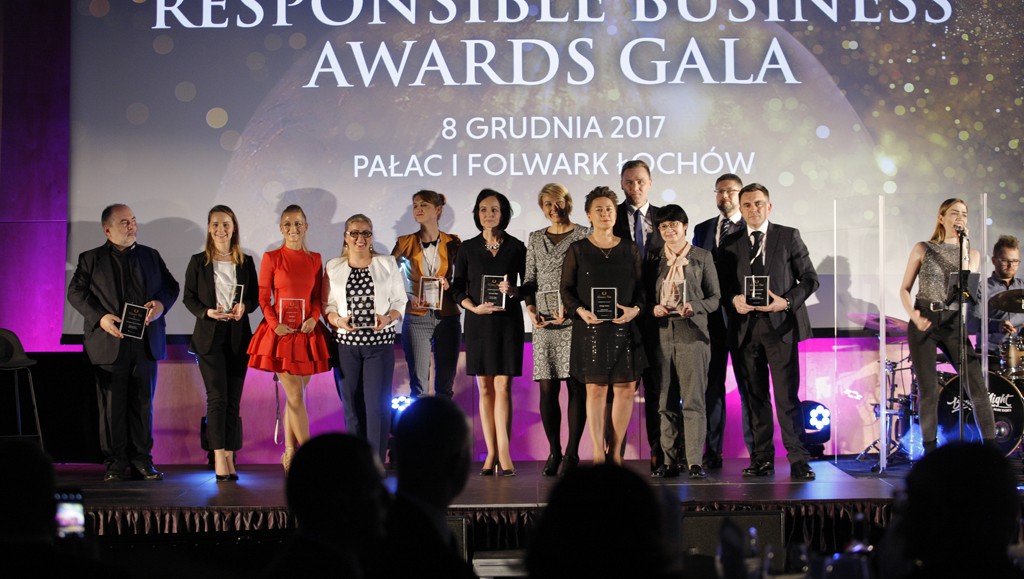 Corporate social responsibility was rewarded for the third time on December 8 in the Łochów Palace and Folwark. During the “Responsible Business Awards” ceremony we honored companies whose achievements in terms of prosocial activity and CSR were truly exceptional. Kamil Wyszkowski, Representative and General Director of the Secretary-General’s Initiative Global Compact Network Poland.

“We want to popularize the implementation of CSR practices in corporations, that is why the purpose of today’s ceremony is to emphasize the great involvement of companies in prosocial programs and projects as well as to show their contribution to the creation of a better society” – said Beata Radomska, CEO of Executive Club.

A unique surprise of the day was the Honoris Gratia badge received by CEO Beata Radomska from the Mayor of Kraków, Jacek Majchrowski. The distinction was presented by Rev. Andrzej Augustyński, President of the Management Board of the SIEMACHA Association.

The event was opened by Cezary Pietrasik, Head of CEE, Warburg Pincus, President of the Management Board of the “Efekt Motyla” Foundation, who talked about teaching people how to catch fish instead of giving them one. He used the example of the Foundation, which supports young people by granting scholarships as well as organizing language courses and motivational trips to encourage their further development.

The plenary discussion moderated by Grzegorz Malinowski from the Department of Economy of the Kozminski University was focused on the impact of CSR on the development of organizations and responsibility for the environment. Robert Daniluk, Quality, Security and Sustainable Development Director at Lyreco Polska, pointed to the evolution of CSR tools provided by new technologies. “It is very important to inform about the implementation of CSR goals via different media, which constitute an indispensible aspect of communication in the modern world” – said the Director.  Joanna Stankiewicz, Communication, Marketing, and Digital Media Production Manager at Canon Polska, emphasized that the face of CSR in companies has changed significantly in recent years. Companies are more focused on building corporate social responsibility strategies. Prosocial actions are no longer just about the allocation of financial means, but also revolve around building a strategy, conveying certain values, and involving employees. Karolina Sołowow, Chairman of the Council of the “Fabryka Marzeń” Foundation, when asked by the moderator about the changes in the foundation in recent years and its cooperation with entrepreneurs, replied that companies decide to cooperate with non-profit organizations increasingly more often. For a company, sharing its wealth should not only be an obligation, but a privilege. She pointed out, however, that it is much easier to talk and establish cooperation with companies whose manager is also the owner than with foreign enterprises with offices in Poland. Władysław Grochowski, CEO of the Arche Group, talked about the idea of teal organizations and organic company development, which results in a visible increase in entrepreneurship and, at the same time, philanthropic activity.

The next part of the meeting started with a short speech by dr hab. Bolesława Rok from the Department of Entrepreneurship and Business Ethics of the Kozminski University. He emphasized that it is the nature of leadership that someone always follows the leader. These people are the ones who create the leader. The professor mentioned 3 metaphors depicting different models of operation. The first one was the head of a corporation, managing the company from the top floor of a skyscraper, emanating his power downwards as it cascades down the hierarchy. The second was the leader of a rally or marathon, followed by a crowd. The third metaphor showed that we become team leaders when needed, just like in a jazz band – sometimes it is the trumpet, sometimes the bass. These words served as an introduction to the second panel entitled Ethics in business – value-based leadership. The first question was directed to Małgorzata Zdzienicka-Grabarz, President of the Management Board of the BGŻ BNP Paribas Foundation. Do employees expect ethical conduct? How do they show it? Are specific procedures required to implement such behavior models? According to the President, people always expect others to be ethical towards them. This is not only true for the workplace. Procedures are required, but they are not the most important thing – they help order behaviors. Personal responsibility is also crucial. Ethics is a process of mutual conversation. Rev. Andrzej Augustyński, President of the Management Board, CEO of the SIEMACHA Association was asked the following question: “Where do ethical people come from?”. He replied that ethics can only be learned. You can equate knowledge with ethics. Wise = good. Being responsible comes from giving answers. Responsible people are the ones who are able to provide wise answers. Ethics cannot be detached from cognitive processes. The next question concerned dealing with unethical people within an organization. Rev. Andrzej Augustyński said clearly that if you do not build, you destroy. If we get rid of unethical people from your structure, they will go somewhere else. This is not a responsible attitude. We need to try to educate such individuals, not annihilate them.

Cezary Pietrasik, Head of CEE, Warburg Pincus, President of the Management Board of the “Efekt Motyla” Foundation joined the conversation. He discussed the model of operation of his foundation, which tries to show positive family relations to its charges and present the fantastic role of the father. Another question of Bolesław Rok concerned the expectation of the society in terms of positive role models. According to Cezary Pietrasik, these expectations are widespread, especially among those who achieve certain social positions. Many entrepreneurs, because of their recognizability, find themselves under the pressure of external expectations. After this remark the panelists moved on to talk about whether people with large financial resources feel more pleasure when spending money on luxury goods than on charity. This issue was further discussed by Tomasz Wiśniewski, Partner at KPMG. He showed the audience a report indicating that people earning on average 20 thousand a month believe that they should be generous philanthropists. Another question in the discussion concerned the anti-corruption act and how it will improve the ethicality of companies. The answer was provided by Tomasz Wiśniewski. The implementation of these regulations will generate costs, some people will be less productive, because they will be dismissed from their functions. If the level of ethics increases, it will also improve trust in trade, which will in turn increase the market value of companies.

At the end of the discussion, Rev. Andrzej Augustyński emphasized that the shaping of ethical attitudes requires constant reference points, which allows for experimentation. Even if we get lost in the creation of a new reality, we can always use these lasting values to return to the right path.

Once the professional part was over we had a short break, after which we invited Kamil Wyszkowski, Representative and General Director of the Secretary-General Initiative Global Compact Network Poland, to the stage, who gave a speech on human rights in companies. He emphasized that ethics and transparency should be king in the workplace, not the maximization of profits.

Afterwards the conference focused on an especially important part of the evening, the awards in the “We create the world” (“To my tworzymy świat”) competition organized by Canon Polska. The project is designed for young people who want to release their creativity, share stories with others, and inspire people through their works.

Then the time came for the “Responsible Business Awards” ceremony, during which we honored entities with exceptional achievements in the areas of sustainable development, charity initiatives, and corporate social responsibility.

The awards and distinctions went to:

Special Category – Patron of Cultures of the World
Kulczyk Foundation