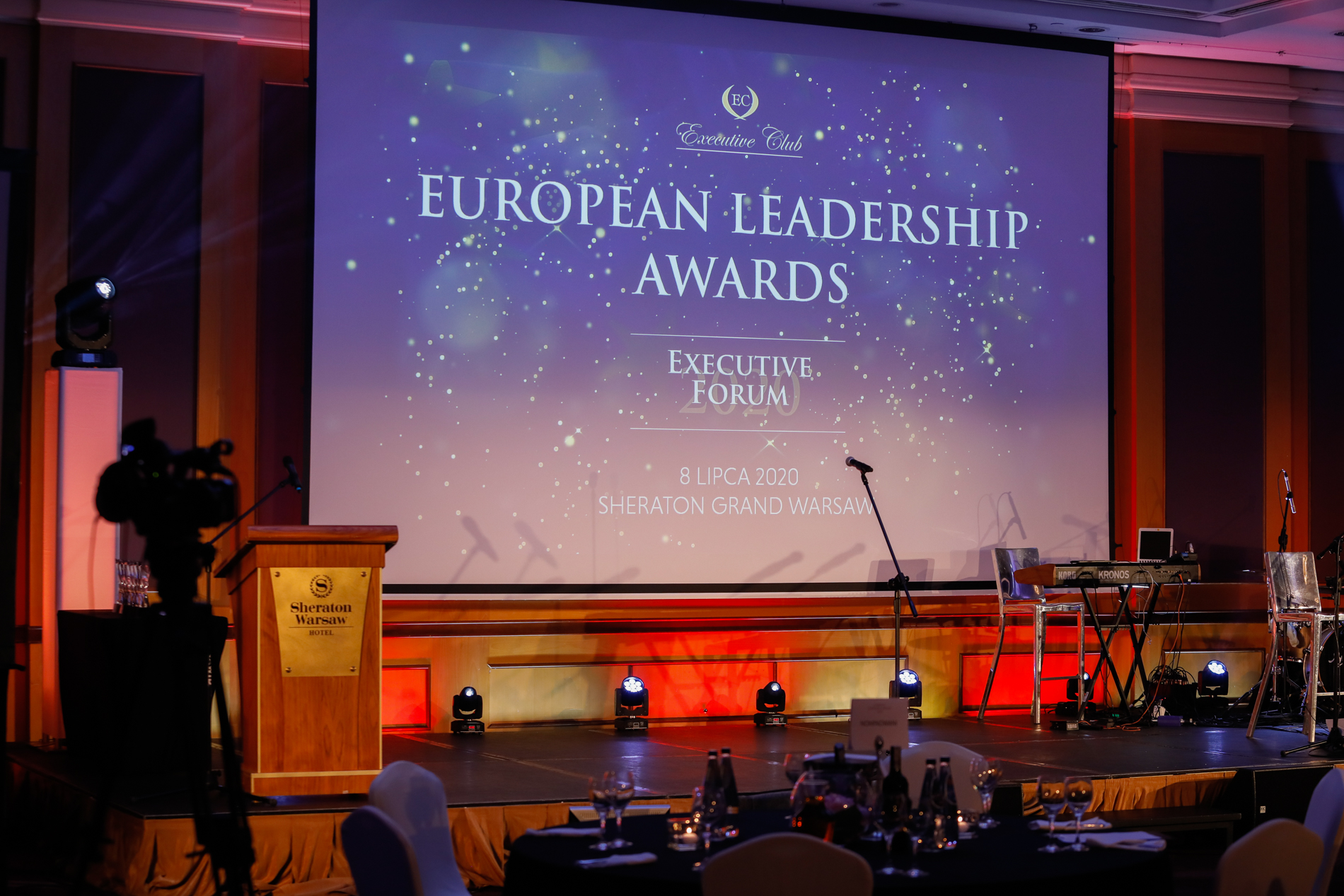 On July 8, at the Sheraton Grand Warsaw Hotel, we had the pleasure to organize the VIII edition of the “Executive Forum”, which theme was: “Entrepreneurship – Expansion – Innovation”. The program of the event was divided into two parts, the first – substantive, consisting of 3 speeches and 3 discussion panels, and the evening part, which was the “European Leadership Awards” gala.

The conference was inaugurated by the first special guest, who was Nancy Giordano – one of the best futurists in the world and curator of TEDx in Austin. The theme of the presentation was the enterprise of the future, and the futurist focused on its technological, social and ecological aspects. Nancy Giordano emphasized that rapidly changing technology, growing information and cultural changes require high adaptability from companies and people. The latest data shows that societies are polarizing economically, the pandemic has redefined many businesses, and scientists estimate that 1/3 of existing plants and animals on Earth could die out in the next 50 years. Ask yourself: how will we have to adapt, what will the future bring and what will it require from us? Will artificial intelligence soon replace GPs? You will find the answers to these and many other issues by watching our Special Guest’s speech at this link.

After an extremely interesting presentation, the time has come for also interesting panel discussion about the enterprise of the future, moderated by prof. Piotr Wachowiak – Vice-Rector of Science and Management at the Warsaw School of Economics. The panelists included: Robert Kasprzak – Managing Director of the Product Management Division, Bank Gospodarstwa Krajowego; Łukasz Marcinkiewicz – General Director of LH Engineering and Lafarge Infrastructure Solutions in Poland; Jacek Pawlak – President, Toyota Motor Poland; prof. Piotr Płoszajski – Professor in the Chair of Management Theory, Warsaw School of Economics; Karolina Radziszewska – Vice President of HR and Administration at the Skanska office company in the CEE region. To the first question “can company think not only about profit?” panelists agreed that companies can not think only about profit. During the discussion, it was found that companies guided by a long-term strategy, wishing to employ the best specialists and attract aware customers, first of all must include sustainable and responsible development in their strategy, which is why a large part of companies’ profit is currently invested in environmentally friendly technologies. One of the development technologies are perovskites, which, covering the building layer, allow its self-sufficient energy production. Another technology of the future enterprise mentioned during the panel is a zero-emission hydrogen drive. Thanks to the discussion on this topic, we learned that hydrogen-powered cars already exist and that hydrogen charging stations will soon be built in Poland. Hydrogen buses and trains are increasingly appearing, and at the moment intensive work is also underway on aircraft that would use the same technology for propulsion. Finally, it was emphasized that the enterprise of the future means also a great openness to clients and their ideas, which enables them to co-create the company’s strategy. The conclusion from the panel may be that most companies already have “in DNA” operating in an environmentally friendly way, and that the company of the future is eco.

After the first panel, the time came for our next Special Guest of this year’s conference, which was Peter Cochrane – Professor at University College London, a technology and business consulting guru for governments and organizations around the world. The presentation was entitled: “Revolution 4.0 as a key to sustainable development”.

The author of the speech has repeatedly stressed that there is no such thing as waste – there are only misused resources. Excessive consumption means that we use one and a half times more resources than the planet can provide. Being aware that natural resources are limited, and any improvement and increase in efficiency do not neutralize the negative impact of factories on the environment, only slowing it down, appropriate actions should be taken. Peter Cochrane proved that Revolution 4.0 has all the tools to prevent negative effects of excessive consumption and, as a result, huge waste. A good example of development in this direction is the comparison of an internal combustion engine and a new electric motor. The production of the first one is complicated and requires many components, and its impact on the environment is negative. In response to the need to reduce emissions, an electric motor was created – much simpler in design, it can be printed with a 3D printer and is zero emission (as long as the current for its operation comes from renewable energy). There are many more examples and visions of the future in the Special Guest’s speech, with particular emphasis on IoT and cooperation between people and robots, and the whole is available at this link.

The author of the third and last speech that day was Artur Pollak, President of the Management Board of APA Group. The presentation was entitled “Nazca Platform. Polish response to Industry 4.0 ”and concerned Revolution 4.0 in industry at every stage. The arguments presented in the presentation confirmed that Revolution 4.0 is undoubtedly a huge change and we should learn to manage it from the very concept, through the establishment of an independent, dedicated team, to implementation and its effects. What tools are necessary to make such a change, what are the stages of implementation and how to measure its effects? You can find out more about it at this link.

The moderator of the second discussion panel, entitled “New business models in the age of artificial intelligence” was prof. Michał Kleiber – Vice President of the European Academy of Sciences and Arts, President of ECCOMAS. Among the panelists were: Sylwia Bilska – General Director, Member of the Board of Edenred Polska; Ireneusz Borowski – Country Manager, Dassault Systèmes; Mariusz Pełechaty – CEO of KODA Bots and co-founder of Hexe Capital; Artur Pollak – Chairman of the Board, APA Group. One of the main topics of discussion was remote work, which, as an alternative to office work, commonly appeared a few months ago, in connection with the coronavirus pandemic. Initially, this solution was very attractive for both employees who could, among others save time on commuting and for employers who could optimize the costs of renting offices. All participants agreed that over time it turned out that we needed stimulation from other people. It turns out that without the contact the social factor processes disappear, and as a result our empathy, relativity and creativity decrease. To sum up, neither of these two modes of operation is good enough and, according to panelists, a hybrid work model would work best, which will probably happen soon. Then, the panslists discussed the human superiority over artificial intelligence. It was found that, above all, people adapt quickly to change. People also have social skills such as creativity and empathy, which artificial intelligence is not able to assimilate, and which prevent certain professions and industries from disappearing. However, the point is not to implement artificial intelligence that would replace man, but to use its potential to streamline many processes and thus relieve the human unit of tasks performed.

After the lunch break, the time has come for the last discussion panel entitled “Road to global expansion”. The discussion was moderated by prof. Roman Sobiecki – Dean of the College of Enterprise Studies, Warsaw School of Economics, and the panel included: Zsolt Fekete – Chairman of the Board, Algotech Polska; Przemysław Janiszewski – Vice President of the Management Board, Polimex Mostostal SA; Jacek Kostrzewa – Chairman of the Board, Skotan SA; prof. Jerzy Pietrewicz – Head of the Department of Market Analysis, College of Business Administration, Warsaw School of Economics; Grzegorz Słomkowski – Member of the Board of the Polish Investment and Trade Agency. “The path to global expansion is not strewn with roses and it is not a racing track”, this statement opened the discussion and allowed to state that from year to year Polish companies see an increasing need for foreign expansion, but firstly it needs several important steps to be taken . It is important in this case to thoroughly explore the market, carefully select local partners, have human resources and plan the stages of this process – all this will help to overcome barriers that can effectively block expansion. It was then found that cultural, economic and administrative differences significantly affect the possibilities of adapting the company’s offer to the foreign market. Language differences, stereotypes about Poland, different styles of communication, force domestic companies to take a number of actions to adapt products to the needs of customers of other nationalities. To remain competitive, Polish companies also had to expand their offer and improve quality. According to panelists, regardless of the strategy of expansion into new markets, one has to face many challenges, which if not taken into account may result in failure.

After the substantive part was over, it was time for the evening gala of awarding “European Leadership Awards”. These awards are granted to honor the best companies, outstanding managers and business leaders who implement the highest standards of leadership, show exceptional commitment to the country’s economic development, adhere to ethical standards in business and pay special attention to responsible business conduct. Nominations for the prizes were selected on the basis of the applications of the Competition Jury, and then its members, after stormy deliberations, selected winners in 7 categories.

Winners of the “European Leadership Awards”:

INNOVATION OF THE YEAR

FAIR PLAY COMPANY OF THE YEAR

CEO OF THE YEAR

Jacek Pawlak – President of the Board, Toyota Motor Poland

Leszek Gierszewski – President of the Board, Drutex

The evening ended with a concert of the “Boogie Night” band and a networking banquet. The stream from it can be found at this link.