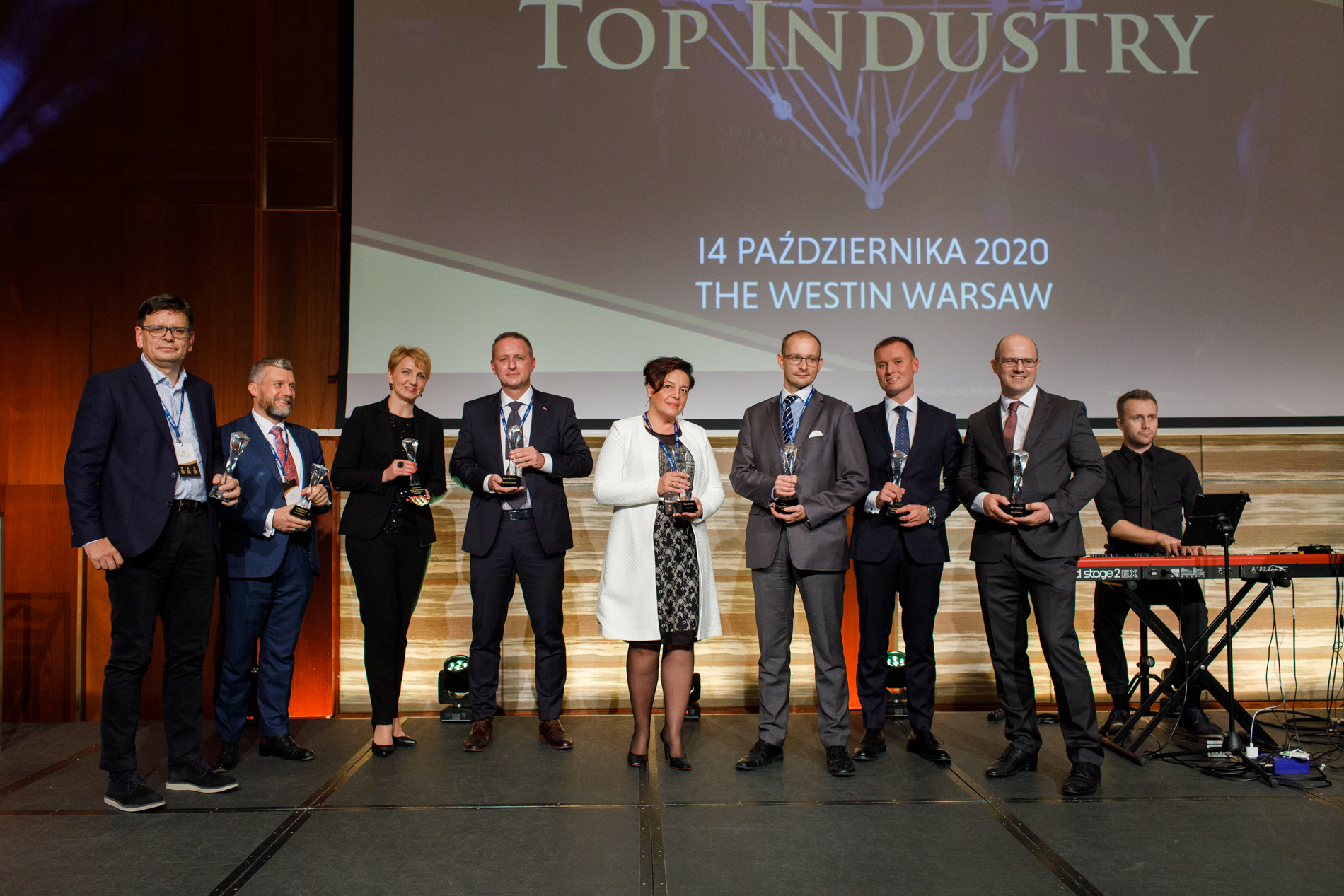 On October 14, the “Top Industry Summit” conference was held at The Westin Warsaw hotel, during which the key directions of industry development were discussed. Three discussion panels, four presentations and 12 “Top Industry Diamonds” handed out – this is just a summary of what happened during the 9th edition of the conference.

The substantive part of the event was opened by a speech by Paweł Kolczyński, Vice President of the Management Board at the Industrial Development Agency, on the pandemic in the economic sphere. The speaker pointed out that despite unfavorable conditions, the Polish economy, losing 8% of GDP, is one of the three economies in which this decline was the lowest. Only in Lithuania and Finland the decline was smaller than in Poland. Among the important macroeconomic data, it is also worth paying attention to the stabilization of unemployment and an increase in employment in industry. The operating model of companies has also changed – digitization has accelerated dynamically, and thus the “train” called Industry 4.0 is departing faster and faster, and it is very important to implement appropriate solutions and be able to get in.

After this introduction, it was time for panel discussions. The subject of the first of them were intelligent factories and its moderator was prof. Andrzej Kolasa – Dean of the Faculty of Production Engineering, Warsaw University of Technology. The discussion was attended by: Ireneusz Borowski – Country Manager, Dassault Systèmes; Marek Dalka – Manager of the Innovation, Incentive and Subsidy Department, Ayming Polska; Piotr Mendyk – Sales and Business Development Director, responsible for cooperation with clients in the Production, Industry and Construction industry, Orange Polska SA; Artur Pollak – President of the Board, APA Group; Andrzej Szałek – Board Advisor, Toyota Motor Poland. Should the implementation of new technologies be the goal of enterprises business activities? The panellists agreed to this question that it is not a goal, but a way by which the quality and efficiency of work and energy consumption can be improved. By implementing new technologies, such as automation, the question may quickly arise, what do we need employees for? “This is not the way, robots will never replace people,” said Ireneusz Borowski and added that new technologies should only be used in those areas where it will help us. Currently, the use of robots and cobots in enterprises in Poland is 2 times lower than in our southern neighbors and 10 times lower than on our western border. Let’s work wisely, not hard, and therefore any repetitive work performed by a human should be automated. Summarizing this panel, we can say that revolution 4.0 is an evolutionary technological change, the effect of which is revolutionary.

“Polish business and industrial intelligence” – this was the title of the second speech today which author was Artur Pollak –  President of the Board, APA Group. Large companies and corporations are after the 4.0 revolution and already are a part of the entire supply chain. The speaker in his presentation told, among others about the role of SMEs and Polish entrepreneurs in the revolution 4.0 and about where to look for appropriate models and how to effectively implement them in their organizations. Moreover, he has presented case study on the factors limiting economic activity in managing the business ecosystem of the largest steel producer in Europe, located in Silesia.

Then we smoothly moved to the second case study, presented by Michał Brzozowski – Managing Director, Metroplan Polska, entitled “Warehouse automation in the background of anticipated changes in supply chains”. Currently, a very interesting process of intensive expansion of the road network is taking place in Poland. This prompts companies to centralize their distribution systems. You will no longer need to be close to the customer since we have a road infrastructure that allows us to do everything faster and cheaper. The forecast for 2022 and beyond is that distribution systems will be centralized. The coronavirus pandemic has led to a new era that requires optimization and thinking outside the box. During this period, manufacturing companies and logistics service providers will have to take advantage of all competitive advantages to stay in business. One such a key advantage is the cross-border service offering and the other, ensuring security, is leaving small regional warehouses as a buffer against the breakdown of supply chains.

The second discussion panel entitled “Logistyka 4.0” was inaugurated by its moderator – Marek Tarczyński – Chairman of the Council, Polish Chamber of Shipping and Logistics, who presented the genesis of the concept of “Industry 4.0”. It appeared for the first time in 2011 at the Hanover Fair, and was clarified in 2013. Then the following panelists were invited to the stage: Michał Brzozowski – Managing Director, Metroplan Polska; Przemysław Piętak – Managing Director Poland, HUB Logistics Sp. z o.o .; Adam Galek – Member of the Board, ROHLIG SUUS Logistics; Grzegorz Słomkowski – Member of the Board, Polish Investment and Trade Agency; Maciej Brzozowski – Director of Representation, Port of Hamburg; Leszek Frączek – Director of the Business Area, Solutions for Industry, Sygnity SA. “We are currently seeing a huge increase in the number of orders for rented, flexible warehouse space. Now, quick reaction, 3-year contracts and business stabilization will come when they will end. Then we will also see the impact of pandemic on the entire supply chains ” – such a vision of the future was presented by Michał Brzozowski. “You can’t waste a good crisis,” Winston Churchill once said, and what is happening today is a huge opportunity for Poland for two reasons: regionalization of supply chains and a shift in freight types from aviation to rail. We are in a situation of very rapid changes, many companies are managing what is happening today and trying to wait out the crisis. However, you have to think about the future and the permanent solution is the progressive automation and digitization of industries, in which enterprises should invest intensively in order to be able to compete better after this storm.

The fourth speech of the day was a presentation by Filip Polit, Domestic Sales Director, FlexSim InterMarium entitled: “From simulation to digital twin”. What is a digital twin and what is it for? There are three types of real-time system visualisation – digital model, digital shadow, and digital twin. First of all, digital twin needs a central place from which it retrieves current data. Then it sends data and starts replication to analyze the future behavior of the system, and finally the system adjusts the behavior of the physical system. It is not necessary to implement such an advanced system as a digital twin in every enterprise. This should be adapted to the digitization and automation stage of the enterprise.

After a short break, it is time for the third panel which theme was the energy of the future. The discussion was moderated by Waldemar Szulc – Director of the Polish Power Plant Economic Society, and the following experts joined the conversation: Przemysław Janiszewski – Vice President of the Management Board, Polimex-Mostostal SA; Michał Motylewski – Managing Counsel, Dentons; Adam Pantkowski – Member of the Board, VH Invest AG; Joanna Podgórska – Director of the Business Development Department, PGNiG SA; prof. Jan Szmidt – Rector of the Warsaw University of Technology in 2016-2020. “Gas is the fuel that can help our economy or even European economy in the difficult energy transformation” – Joanna Podgórska started the discussion with this statement. What other sources of energy will help in the digital transformation and at the same time ensure energy security? According to the panelists, it will not be biogas, which is being abandoned, and offshore seems to be very expensive due to the need to expand the energy transmission infrastructure produced in this way. A step in the right direction is definitely wind energy and decentralization of energy sources, for which, as a country, we are not prepared so far. This applies to both legal regulations and the general profile of the Polish energy sector. The panellists also drew attention to the need for intensive education of future staff in the energy sector and the need for energy education of the society. Such education was successfully conducted in Germany, thanks to which the society accepted the necessity to bear the costs of the energy transformation.

After the substantive part, time come for the evening gala. Its main part was the awarding of statuettes that honored the best companies, outstanding managers and business leaders who contribute to the progressing Revolution 4.0 with their actions. This year, awards were given in 9 categories.

FINANCING BANK OF THE YEAR

ADVISOR OF THE YEAR

CEO OF THE YEAR

Wojciech Dąbrowski – President of the Management Board, PGE

Karolina Szmidt – President of the Management Board, Henkel Polska – distinction

COMPANY OF THE YEAR

PERSONALITY OF THE YEAR

Jerzy Kwieciński – President of the Management Board of PGNiG SA

Honorary Patron – Polish Chamber of Commerce for Electronics and Telecommunications